Fresh tulips from the Netherlands, can be ordered online all year round! 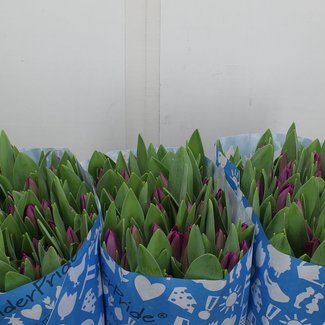 Ah, the tulip! It can hardly be more Dutch, you would think, but actually the tulip is primal Iranian, primal Afghan and primal Kazakh. Nomads took the colorful flowers to Turkey, where tough sultans wore them on their turbans. This is how the flower got its name: 'tulipan' means turban.

The always cheerful tulip is available in white, red, yellow, pink, purple, orange, green or with multi-colored petals. The shapes of the tulip are also a feast for the eyes. You will find them with a single or double row of petals, there are also striking fringed and parakeet tulips with serrated petals and there is the playful lily tulip. Peony tulips look like sisters to peonies and French tulips, unlike most French tulips, are very tall and have very large flowers.

If you gave a tulip away in the sixteenth century, you gave that person wealth. At that time, the flower was immensely popular and a speculative trade in tulip bulbs developed. For the price of one tulip bulb you bought an entire canal house in Amsterdam. A nice bunch now only costs a few euros, but the symbolism has increased in value. When you give tulips, you also give a message. Red tulips, for example, mean impetuous love and black tulips mean: 'I love you so much that I want to sacrifice everything.' So you don't just give them away.

Tulips can be found in the wild in North Africa and Southern Europe as far as northwestern China. With the greatest diversity in three different mountain ranges in Central Asia: the Pamir, the Tienshan and Hindu Kush. The climate here is ideal for tulips because of the cold winters, long springs with cold nights and a dry summer. Tulips need a cold night and a cold winter to grow, so they cannot be grown in a warm climate.

Stay informed about our latest promotions. Be the first to read all about fresh flowers. Receive the most beautiful fresh flower offers for free by e-mail.

By creating an account with our store, you will be able to move through the checkout process faster, store multiple addresses, view and track your orders in your account, and more.

You have no items in your shopping cart